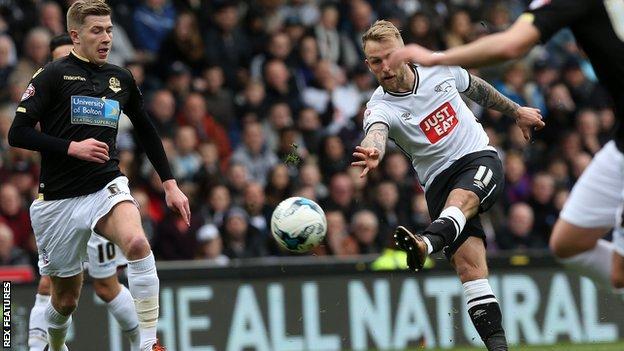 After drawing 0-0 with rivals for promotion Bolton, Derby extended their unbeaten league streak to nine games.

In front of the big crowd Bolton has seen in more than ten years, both teams struggled to produce clear chances that would have taken them up to fourth with a win.

In a scoreless first half, the Rams came the closest when Bolton defender Eoin Toal mishandled a clearance effort from Louie Sibley’s cross, beating goalkeeper James Trafford to it and hitting the bar with his foot.

Elias Kachunga came close to winning it for the home team with a bicycle kick at the very end, but he hit Derby goalkeeper Joe Wildsmith square in the face.

Bolton frequently caused problems with some clever build-up play around the Derby box while playing in front of 25,428 spectators, their largest home crowd since being demoted from the Premier League in the 2011–12 season.

However, the Rams’ staunch defense, which has only given up once in five league games, made it difficult for the hosts to score, with Oladapo Afolayan’s deflect first-half goal being one of just two chances on goal.

The Rams struggled to convert good situations into clear chances when David McGoldrick, their leading scorer, was absent due to illness. Before halftime, Jason Knight had a goal-bound attempt stopped.

Following the interval, a superb Bolton play featuring Will Aimson, Kieran Lee, and Liverpool loanee Conor Bradley created a fantastic opportunity for Dion Charles. Still, he missed the left post with a low drive from 10 yards out.

In the second half, neither goalkeeper had to make a save until Kachunga nearly won the match with the game’s final kick. James Collins headed over when well-positioned at the other end, and Knight did the same in the 90th minute.

Bolton, who have only won two of their last seven games, are still in the fifth position, 12 points off the automatic promotion spots, while Derby moves up to the sixth place, another point behind, after their fourth straight league draw.

”Ian Evatt”, the manager of Bolton, said on Radio Manchester:

These games are usually close; I mentioned specific times earlier in the week. We must learn to handle those situations better.

“With Dion, [who] certainly should have scored in an excellent spell after halftime, we had possibly the finest chance of the game.

“I think we took them well when we were calm, but we didn’t offer it enough. Maybe the opposition deserved credit for it; maybe we were a little nervous because of the enormous crowd and the significance of the game.

“We did an excellent job of representing ourselves. I believe we can perform better, but in games with a six-point swing, if you can’t win, don’t lose.

I honestly thought that today would be one of those days where a goal would come more from a mistake than from fantastic play, to be completely honest. The field wasn’t suitable for either team to play on because it was pouring rain.

They had a few fantastic long throws near the end that I thought would just sit for them, and we had a few very nice set-piece opportunities that I’m unhappy we didn’t take advantage of.

Despite my bias, I believed we were the superior team in a close game.