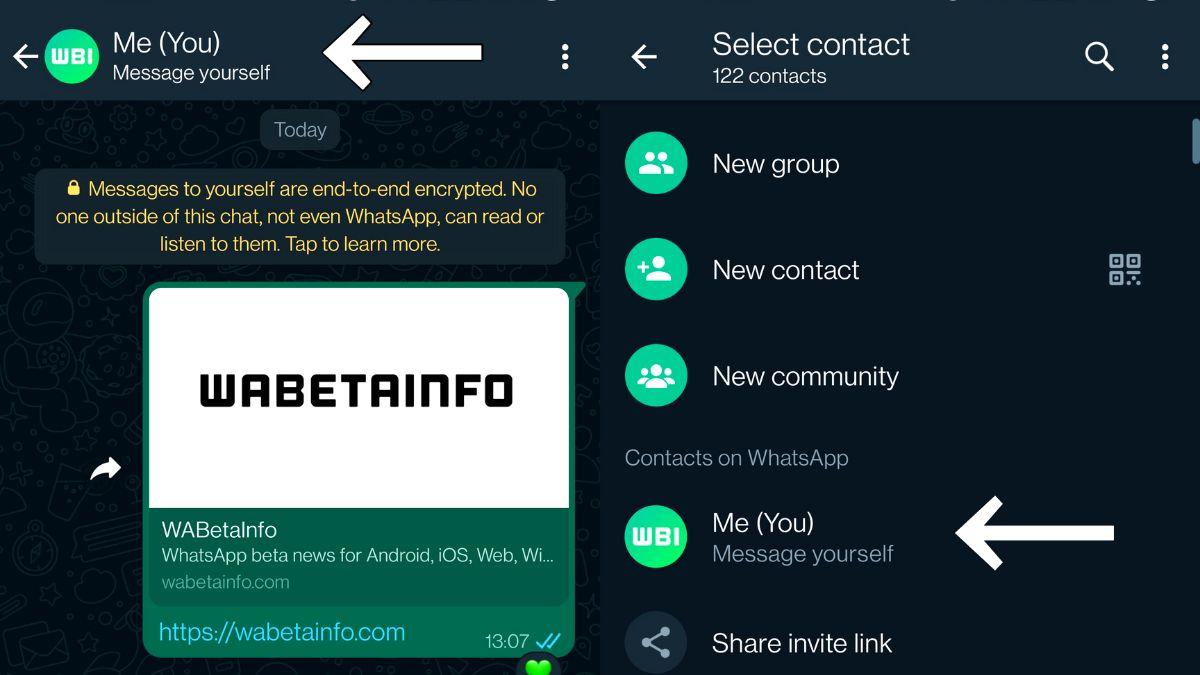 WhatsApp is a multifunctional app. It has a plethora of capabilities ranging from basic instant messaging to e-commerce and online payments. Another functionality is being added to the list. WhatsApp has begun pushing out a new ‘Message Yourself’ feature to Indian users. You’ll be able to effortlessly communicate with yourself with this new function. It may sound strange, but the applications are numerous.

WhatsApp has released a new feature that allows users to text themselves anonymously while keeping important information safe and accessible. Users can send notes, reminders, and shopping lists to themselves using the ‘Message Yourself’ function.

The feature is likely to be available on iOS and Android in the coming weeks, according to Meta, which revealed the feature. Following feedback from beta testers, the company has verified that the feature will be made available internationally.

With the new update, WhatsApp has added a caption to the chat that it calls Message Yourself. The main difference is that WhatsApp will now characterize the caption as

Another distinction is that earlier, you had to open your chat simply through ‘Click to WhatsApp.’ It is a method in which you must enter your own phone number into a URL to begin the chat. Once the chat has begun, it will always be visible in the chat list. The new ‘Message Yourself’ function will make it easier for users to use the chat for the first time, even from within the app.

Why would you ‘Message Yourself’ on WhatsApp? This tool is useful if you need to share notes or essential documents with yourself. Because WhatsApp is available on a variety of platforms, this function facilitates the quick transfer of media, documents, contacts, and other data from one device to another.

Step-by-step Complete guide on How to use the Message Yourself feature:

In fact, before the capability was even available, many users had already figured out how to text themselves. WhatsApp has stated that this functionality will be accessible on Android and iOS in the next weeks and will be rolled out to all users.

Previously, WhatsApp users had to utilize WhatsApp Web to begin texting themselves using the ‘Create your link’ feature. If you haven’t received the ‘Message Yourself’ option, follow these steps to start a chat with your phone number.

Other upcoming features on WhatsApp

WhatsApp is developing a feature that would allow users to upload audio notes as status updates. WaBetaInfo discovered this functionality on the iOS beta of the app. As status updates, users can contribute text, photos, and videos.

Users can record status updates by tapping the microphone button in the bottom right corner, according to the source as mentioned above.

Additionally, WhatsApp is working on a feature that would let users of its Windows app to share contact cards via the company’s native desktop client. Thanks to this long-needed feature, it will be simpler for users to share contacts in chat.

It has been in the works for a time to add an edit capability to WhatsApp. According to a previous story, the Facebook-owned app has already begun testing the function and may soon make it public.

You may simply correct typos and other problems in your messages by using the edit message option after you’ve sent them.

Not just WhatsApp is attempting to provide an edit button. The edit button has been beta testing on Twitter for some time and is already accessible to its paying customers.

WhatsApp is a multifunctional app. it has released a new feature that allows users to text themselves anonymously while keeping important information safe and accessible. and this aritcle we Complete guide you How to use the Message Yourself step-by-step and introduce Other upcoming features on WhatsApp like Voice status updates, Contact cards, and Edit messages.